The most important customs and traditions in Tirol & Vorarlberg

Enjoy lively tradition in your holiday in St. Anton – your home away from home. Not only in your Hotel Bergschlössl, but also in the alpine region all around the Arlberg. Especially in autumn you’ll experience Tyrolean and Vorarlberg’s culture. But also winter offers many interesting events on the customs of the western regions of Austria.

Your Hotel Bergschlössl in St. Anton informs you about the most beautiful customs and traditions in the region for autumn and winter.

As the people of Tyrol like to say: “There is only one Tyrol”. Tyrol’s culture presents itself incomparable and unique with many beautiful customs that are still lived with joy by the locals. In Vorarlberg things are the same, but still very different: Though the two regions are directly adjacent the customs and even the languages can be clearly distinguished from each other.
During your holidays in St. Anton in Tyrol, you will enjoy kind of a cultural intertwining. Many of the Tyrolean old customs are still practised in almost the same way as when they originated – hundreds of years ago, as they have been passed down from generation to generation.
Discover the historical Tyrolean countryside with its majestic peaks and its hospitable inhabitants whose traditions you’ll experience firsthand. 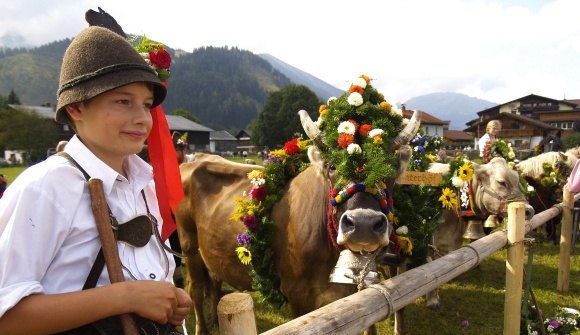 The traditional “Almabtrieb” is among the best known and most popular traditions in the Austrian mountains. Mostly they take place in the months of September and October, when they end a relaxing summer in the mountains for animals and humans.
Cows, sheep and also horses are decorated with festive garlands and bells for the occasion of “Almabfahrt”. The cattle drive is a joyous occasion for the farmers as well as the guests. Back in the valley farmers celebrate the weathered well summer on higher grounds with an “Almfest” including a farmers market and traditional live music. 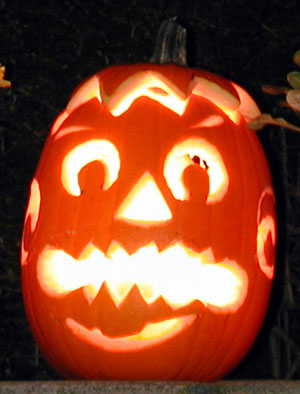 Vorarlberg’s tradition of “Moa” is very similar to the American Halloween tradition. Also here, people carve faces into pumpkins, which should look like the face of the moon. Therefore the finished artwork is called “moo”. Also here, the local children go from house to house and ask for candy in exchange for singing a song or reciting a poem. But there is no trick or treat. For some time now, this typical Vorarlberg custom is giving way to the classic Halloween we know from America.

Noisy and odorous “Perchten” and “Krampus” break the otherwise more silent pre-Christmas season. A “Krampus” is a scary figure with centuries of tradition in western Austria. In his role he resembles the Bogeyman. Boys from the village dress up for St. Nicholas Day with fur suits, wearing elaborately carved wood masks with most fearsome real horns.
Their devilish walk through the streets with loud bells on the backs and a rod in their hands is frightening for children and adults too. Luckily lovely Nikolo is with them to bestow the “good” children with little presents such as chocolate and nuts. The “naughty” kids on the other hand have to endure some gentle strokes by a Krampus’ rod to be reminded to listen to their parents and teachers.

In twelve traditional nights around Christmas, called “Rauhnacht”, people traditionally smoke their house and barn. The origins of this tradition lie in some ancient pagan rituals. The family goes through the premises with incense while praying the Our Father or a rosary. In this way, the home, the barn and the cattle is freed from evil spirits and is being blessed in the coming year. Among other days, people also smoke their houses on Christmas Day.

On Christmas Eve Christ Child is coming to Tyrol and Vorarlberg. The girl with the gold curly hair is considered a symbol for Christmas in these regions. On the evening of December 24 Christ Child puts the presents under the festively decorated Christmas tree. But before that, a traditional mostly vegetarian Christmas dinner is served and people pray together. After handing out the presents the village community meets for the Holy Midnight Mass in the respective parish.